Nothing is as UNcertain as the Election and Estate Taxes

Nothing is as UNcertain as the Election and Estate Taxes 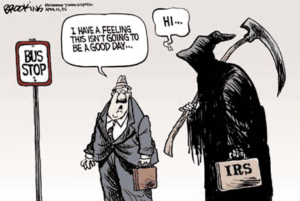 With every Presidential election, estate planners far and wide get very excited. Why? Because we become relevant again (granted we should be relevant for everyone, everyday- or at least every 5 years or so).  We wave the banner of relevancy because once again we get to talk about the extent to which each Presidential candidate intends to levy your hard-earned cash, and rip it from your (1) cold hands, or (2) poor, helpless child’s hands. At least, that is how my clients explain it to me.

The link below explains the different approaches of Clinton and Trump (in a non-partisan manner).  Clinton would allow each individual to give $1M to any individual during one’s life, and $3.5M (including the value of  life insurance) at death, without indexing the exemption amount for inflation. Amounts over the allowable amount would be taxed at 45%. Trump would eliminate the estate tax entirely (which essentially has already been eliminated for 99.8% of individuals).

Feeling the effects of my reinvigorated relevancy, after I read this article (and after writing the above), I needed more information. If there is one thing true about the estate tax (called the death tax by some), it really gets a rise out of people. As an estate planner, probably 99% of my clients tell me they want to avoid estate taxes. This is true regardless of party affiliation – I rarely find a Democrat or Republican that wants to freely give their money away to Uncle Sam. At the end of the day, given that only .2% of individuals have a real estate tax problem on a national scale, I am an angel when I let them know how easy that problem is for me to solve. For those that do have taxable estates, there are 6 ways from Sunday for me to maneuver around  such taxes, in most cases depending on how early they start the planning process.  In conclusion – in the grand scheme of political matters, and even tax matters, the estate tax gets a lot of press (perhaps, even disproportionately).

All that said… let’s look past the rise and look at the numbers:

I undertook this self-imposed challenge thinking I was going to discover something brilliant – that literally no one had discovered.  Then again, I am a lawyer, and when I decided to become a lawyer, I was promised that there would be no math. So, what is my grand conclusion … Based on all these numbers, I am further away from forming an opinion than I was when starting this exercise. If Clinton’s plan was in place then, based on 2009 numbers, only a 1,000 more estates would have to pay more taxes. If Trump’s plan was in place, then 6,000 people would pay less taxes.  Now, this is an over simplification beyond imagination because there are so many other variables to their plans – and again, I was told there would be no math in the law. In the grand scheme of things, based on my fuzzy math, if 0.2% are affected now, we are talking about a change of 0.2%-0.00?% in either direction.

If you made it all the way through this debauchery of an estate tax exercise, congratulations, and sorry!  Perhaps you learned a little, or at least like the comic.  Have a great day.

About the Author: Firm Borakove Osman